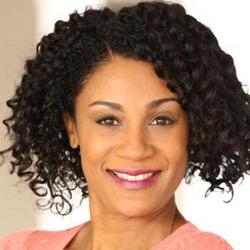 ​Patricia McBride-Demetriou was born and raised in Columbus, Ohio. She began her humble acting career at Urbancrest Elementary where she played the Fairy God Mother in Ms. Graham's second-grade class production of “Cinderella”. Since that time, her love for acting blossomed into a thirty-year profession in the field. Hollywood called and Patricia quit her job at the local television station and moved to Los Angeles, and studied acting at the University of California Los Angeles. While in Los Angeles she appeared in TV shows such as 'Martin', and 'King of Queens'.

​Patricia went on to appear in several theatre productions, feature films, and commercials. While living her dream as an actress, Patricia wanted to see the world, placed her acting career on hold while pursuing other interests. She moved to London, England and then later to Stuttgart, Germany where she worked teaching English.

Since moving back to America, Patricia has renewed her acting career locally in Columbus, Ohio and can be seen in several local television commercials and print ads. You can learn more about Patricia on her acting website at www.PatriciaMcBride.com.